We are interested in how bacteria or viruses are detected by the immune system, and how those responses are connected to various inflammatory and infectious diseases. 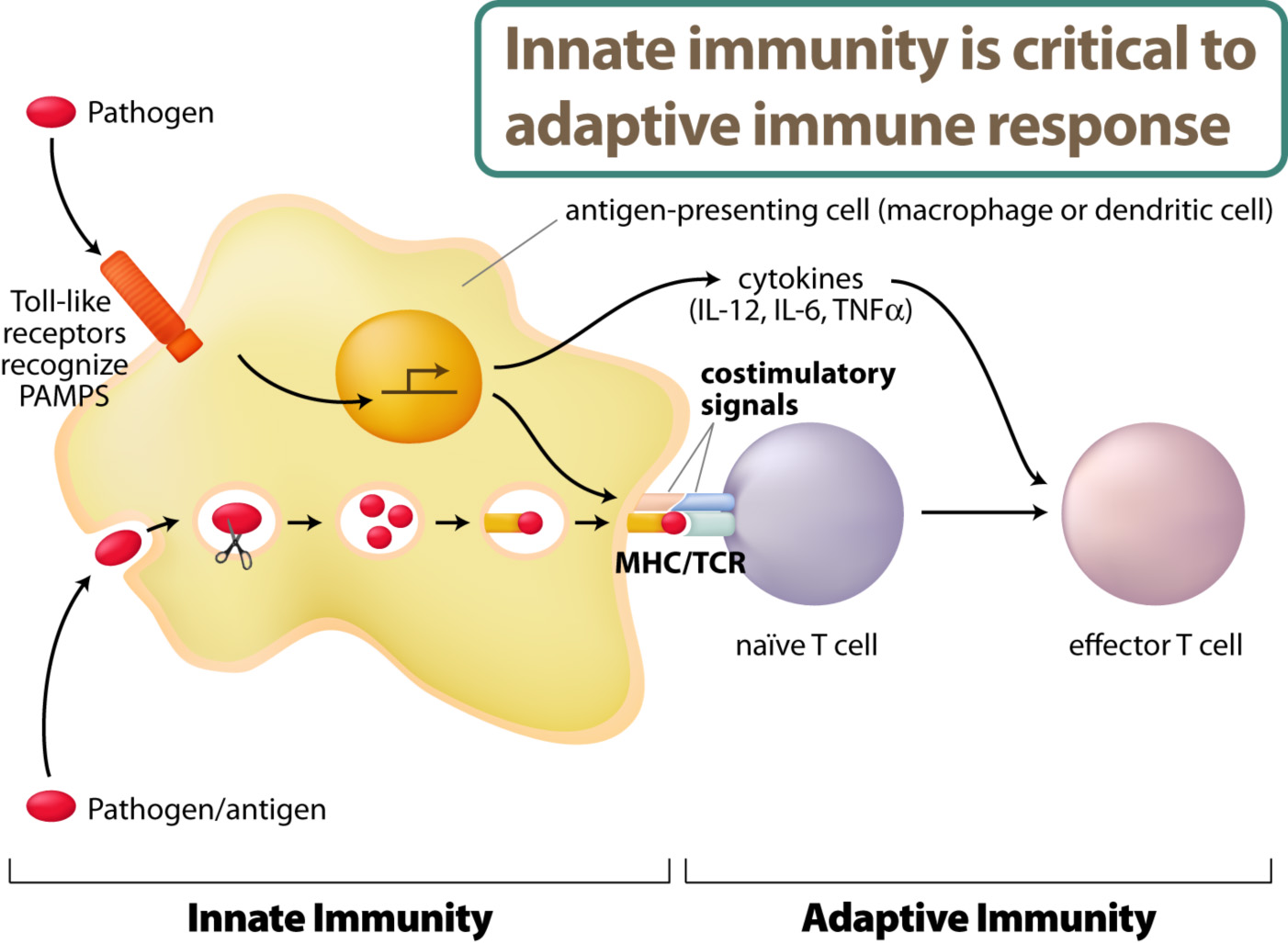 The innate immune system directly recognize pathogens such as virus or bacteria. The activation of innate immunity will allow antigen-specific immune responses by lymphocytes – adaptive immunity.

A variety of microbial products are detected by a family of germline-encoded cell surface receptors called Toll-like receptors (TLRs). TLRs are evolutionarily conserved proteins that recognize specific pathogens or pathogen associated molecular patterns (PAMPs) and trigger signaling cascades leading to host immune responses and inflammation. One of our goals is to determine the molecular mechanisms involved in TLR signaling and its role in disease pathogenesis. We have shown that TLR plays role in the infectious and inflammatory diseases. 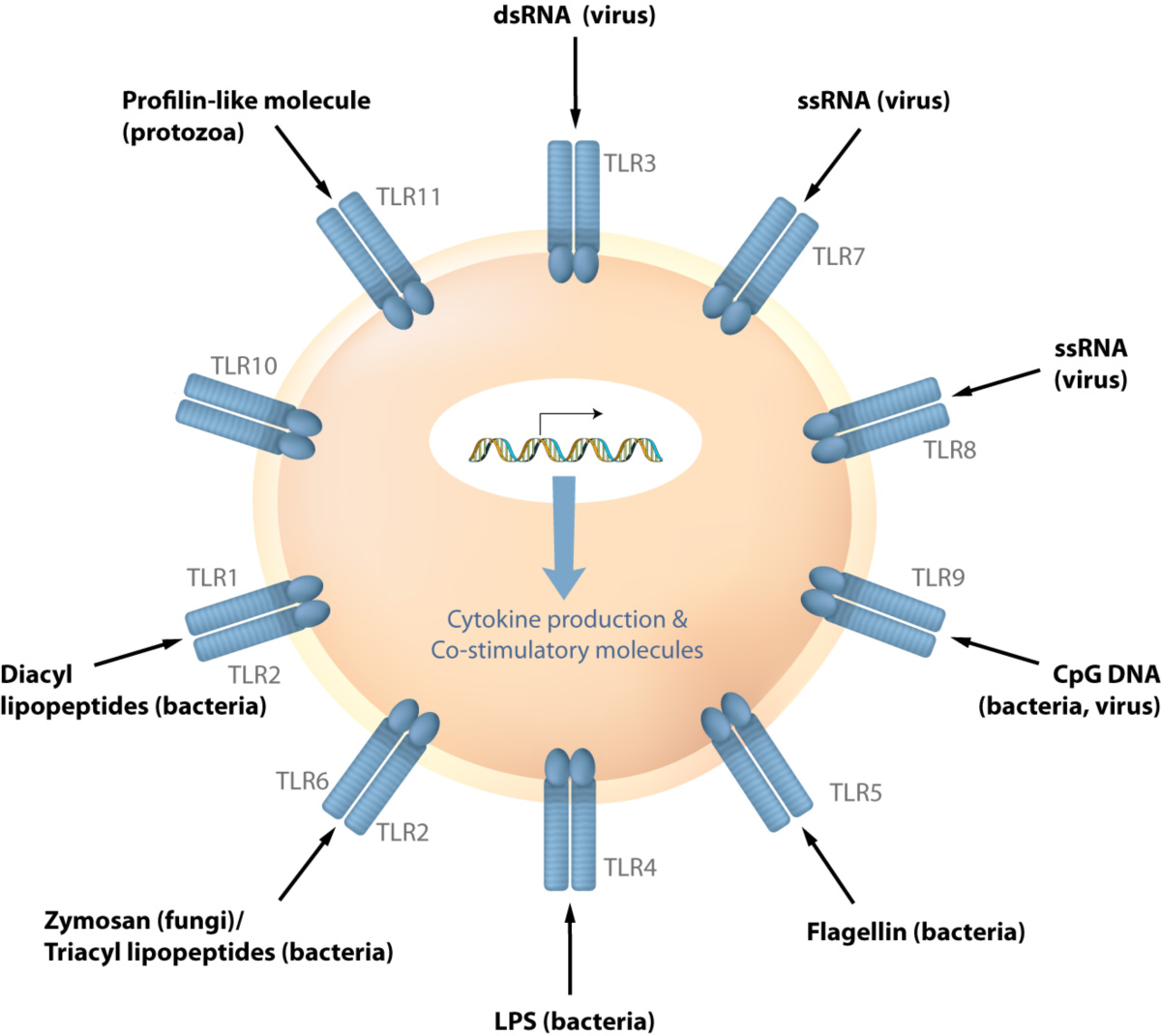 TLRs are receptor to detect pathogens such as virus or bacteria. Upon recognition of microbes the cascade of signaling is activated to induce various immune response genes.

Another gene family that plays critical role in the host defense against pathogens are the NLR protein family. This cytoplasmic protein family is characterized by two motifs: a nucleotide binding domain (NBD or NOD) and leucine-rich repeats (LRRs). NLRs belong to a very diverse protein family. Our efforts are focused on elucidating the function of this protein family, especially on their mechanisms of pathogen detection and downstream signaling cascades, as well as their significance in fighting infectious diseases. 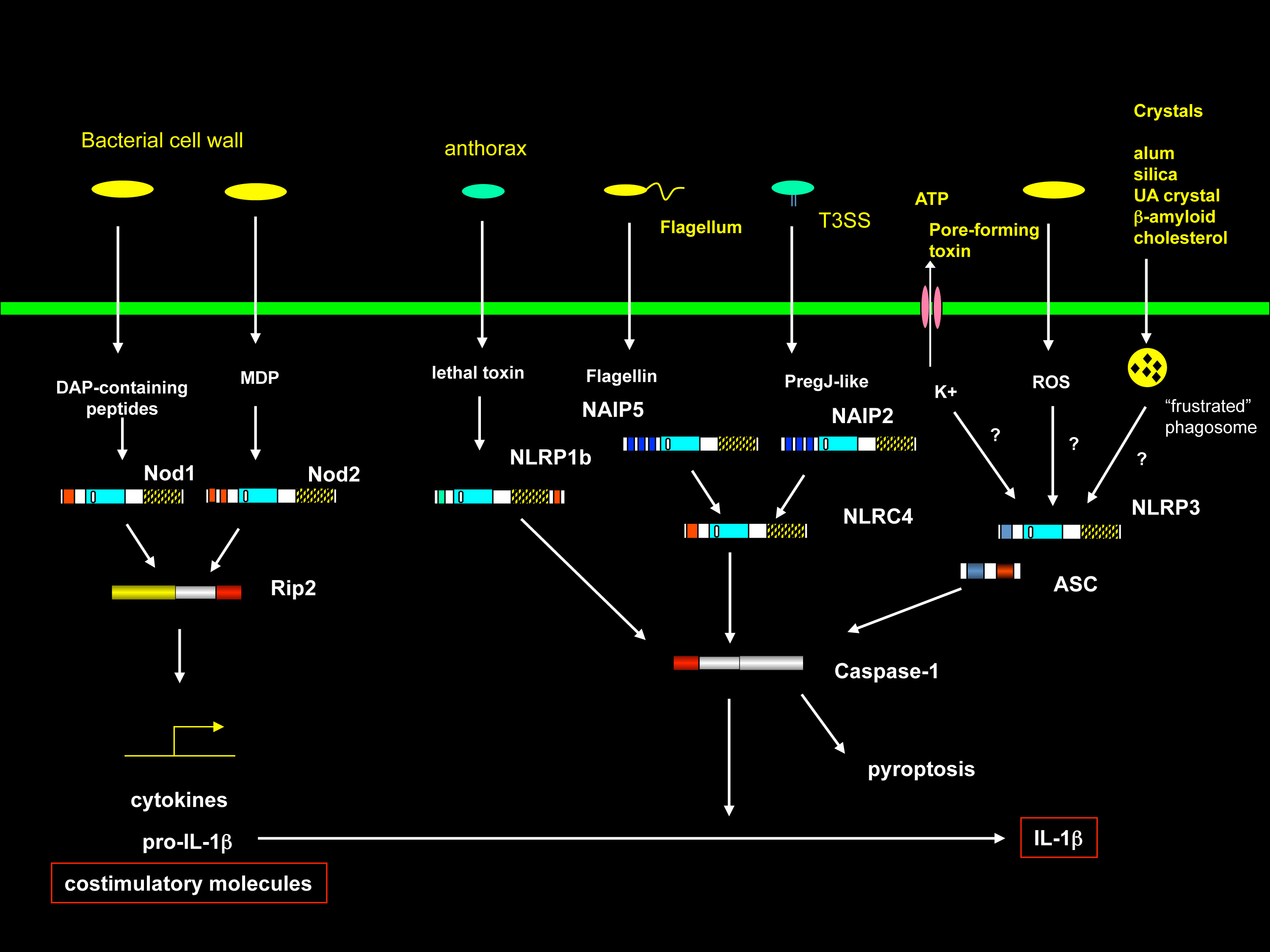 Many NLRs are inside cells (cytoplasm) and detect bacteria or bacterial products. The activation of NLRs cause cytokine production and inflammatory responses. 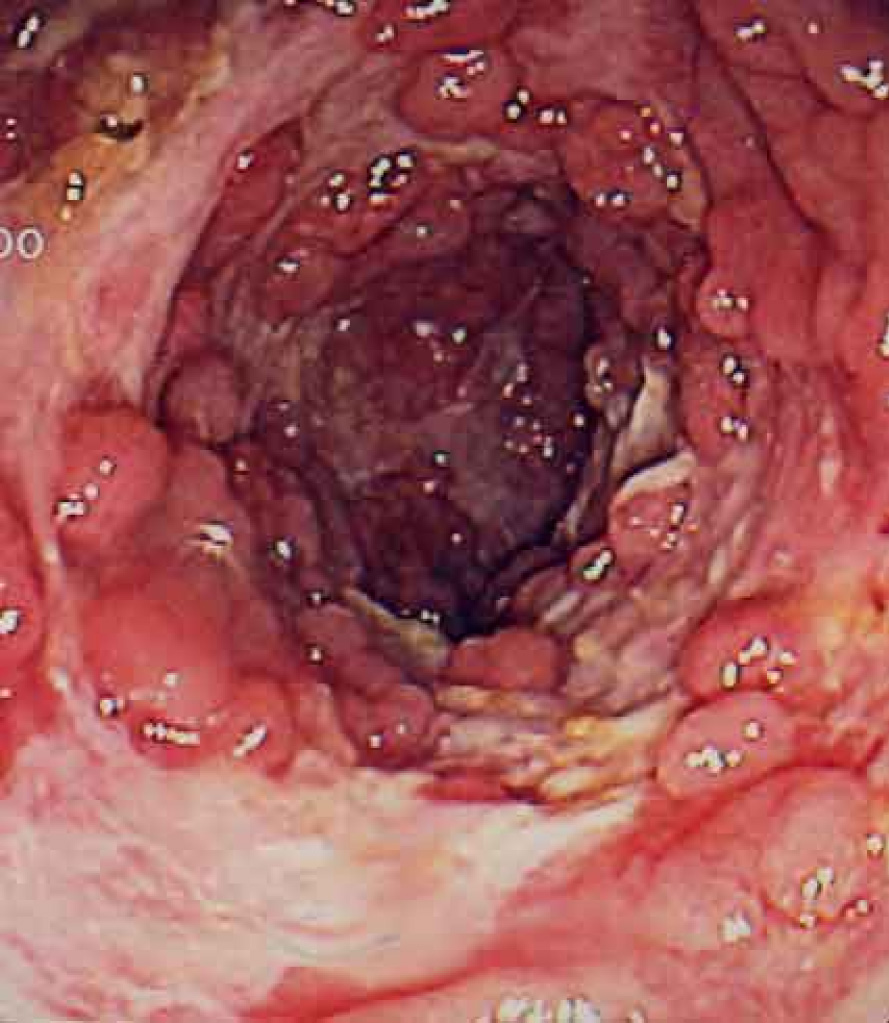 Photograph is an Intestine of Crohn’s disease patient. 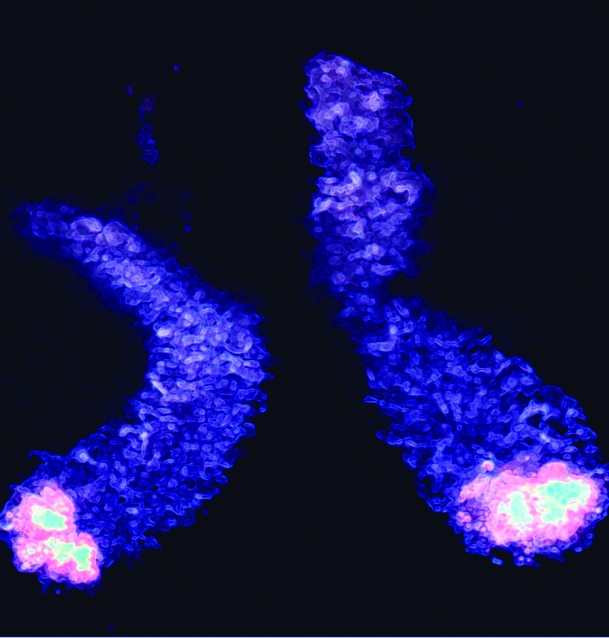 Crohn’s disease is a chronic inflammatory condition of the intestine. NOD2, an NLR family protein, is a sensor of a moiety of the bacterial cell wall. NOD2 mutations are the strongest genetic risk factor of Crohn’s disease in the small bowel (ileum). Nod2 is highly expressed in ileal Paneth cells, which produce anti-bacterial compounds. We are the first group to show the role of NOD2 in the host defense against bacteria in the intestine (Science 2005 307:731). Moreover, we found that NOD2 is critical for the bacterial killing activity of Paneth cells (PNAS 2009 106:15813). Indeed, we showed that mice lacking NOD2 gene have increased loads of bacteria in the ileum (PNAS 2009 106:15813). These findings led us to develop a novel ileal Crohn’s disease model using NOD2-mutant mice (PNAS 2010 41:182). This model strikingly recapitulates many characteristics seen in actual Crohn’s disease and is a powerful tool for Crohn’s disease research and drug development.

MHC (HLA in human) is the most important gene family discovered in modern medical history and Nobel prizes were given three times in this field. MHC genes are critical for infectious diseases, cancer, inflammatory disorders and transplantation medicine.

MHC class I and class II are required for antigen presentation to CD8 and CD4 T cells respectively. While CIITA (MHC class II transactivator) has been long known, the mechanism of expression of MHC class I genes had been largely unknown until our recent discovery of NLRC5/CITA (PNAS 2010 107:13794). CIITA can strongly induce MHC class II and related genes such as invariant chain, whereas another NLR family protein, NLRC5, can specifically associate with and activate promoters of both classical (HLA-A, B, C) and non-classical (HLA-E, F, G) MHC class I genes. In addition to MHC class I, NLRC5 can induce the expression of related genes in the MHC class I pathway, including beta2-microglobulin, TAP1 and LMP2. Therefore, NLRC5/CITA and CIITA regulate a concerted expression of genes in MHC class I and class II pathways, respectively (reviewed in Microbes Infect 2012 14:477 and Nat Rev Immunol 2012 12:813-20). We found that mice lacking NLRC5 gene display largely impaired expression of MHC class I, resulting in impaired CD8 T cell responses (J Immunol 2012 189:516). We also found that NLRC5 moves into the nucleus in cells and activates promoter of MHC class I genes by cooperating with other transcription factors (BBRC 2012 418: 786, Immunol 2012 188:4951). 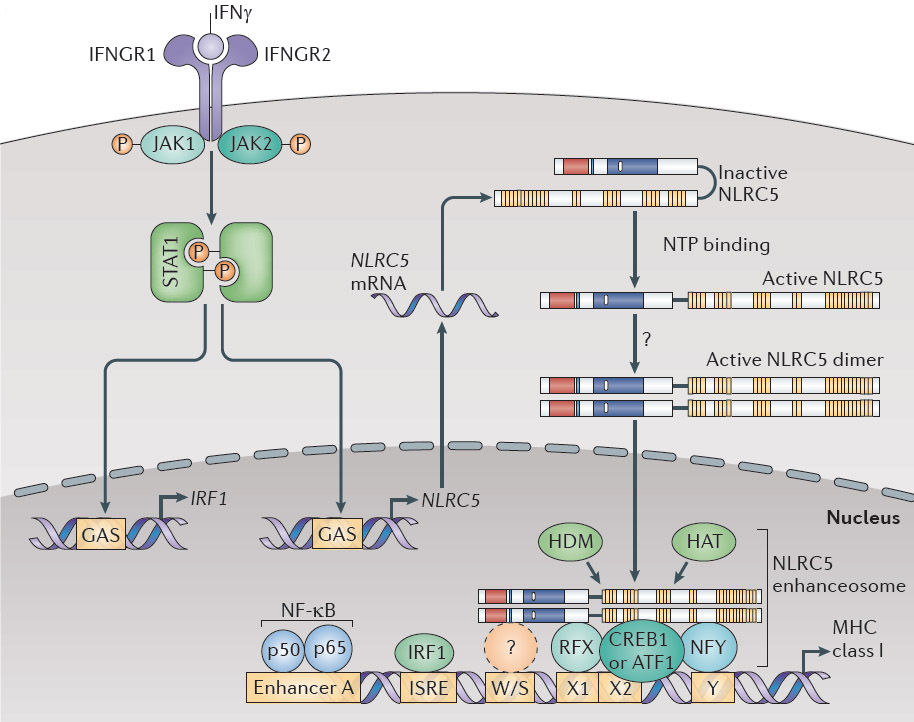 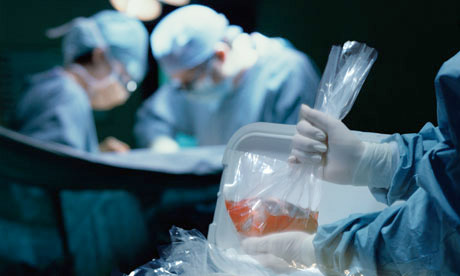 While many patients’ lives are saved by organ transplantation, mismatching of HLA (MHC in human) may cause serious side effects including rejection of transplanted organs and graft versus host diseases (GVHD). 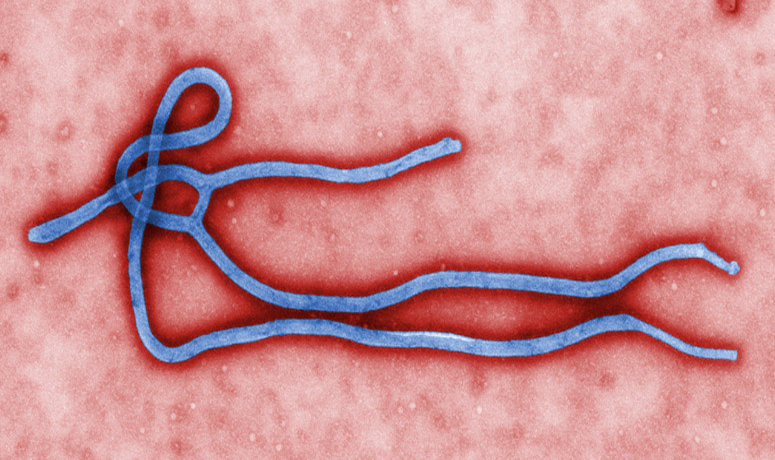 MHC class I proteins are necessary to fight against pathogenic virus and intracellular bacteria. Photograph is Ebola virus, one of the most deadly virus and cause Ebola hemorrhagic fever. 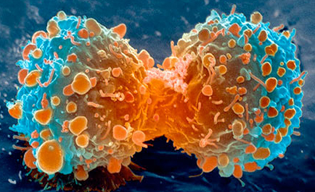