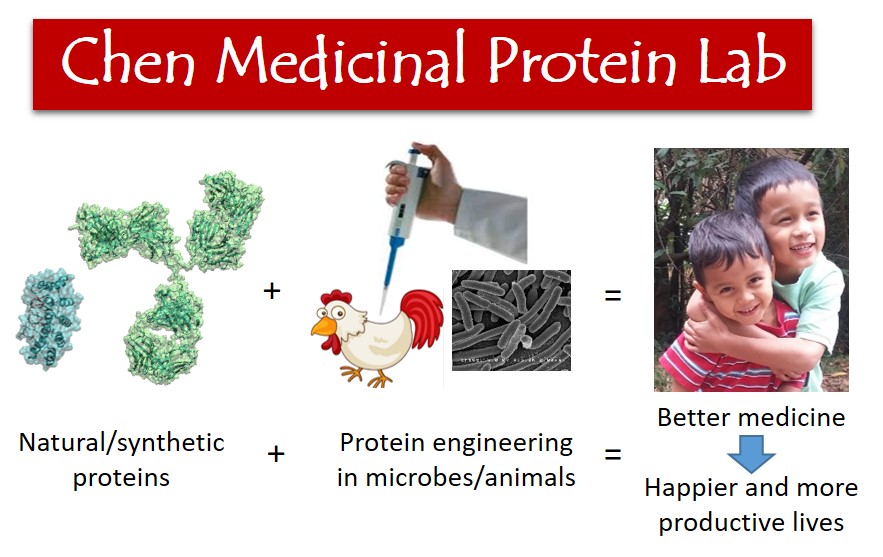 The Chen Medicinal Protein Lab aims to accelerate the discovery, development and clinical translation of protein therapeutics through innovative protein engineering research.  We believe that better medicine enables a higher quality of living, and protein engineers are charged to create the better medicine for today and tomorrow. We are particularly interested in the creation and engineering of affordable protein therapeutics to prevent and treat infectious diseases.

We draw talents from diverse fields ranging from medicine and biology to chemistry and engineering, and integrate tools from genetics, virology, immunology and imaging fields in order to create and engineer proteins for therapeutic application.

Clostridium difficile infection (CDI) is the leading cause of infectious diarrhea in hospitalized patients, with an estimated annual cost to the United States of between $750 million and $3.2 billion. The pathology of CDI is caused by the toxins secreted by the bacteria. Recently, two anti-C. difficile toxin antibodies, actoxumab and bezloxumab, that bind to and neutralize C. difficile toxins A and B, respectively, have achieved success for CDI treatment in a phase II clinical trial. However, only bezloxumab demonstrated efficacy in the subsequent phase III clinical trial. The neutralization potency of antibody is strongly epitope-dependent. Since both actoxumab and bezlotoxumab were engineered using toxins from laboratory C. difficile strain VPI 10463, both showed significantly reduced neutralization potencies against some recently emerged hypervirulent strains of C. difficile. Thus, there is an urgent need to develop broadly effective C. difficile toxins neutralizer. We propose to engineer a non-antibody protein, designed ankyrin repeat protein (DARPin), that is able to bind to and neutralize toxins A and B from a broad range of C. difficile strains. DARPins represent a versatile class of binding proteins that have been engineered to bind diverse targets with up to picomolar affinity. Furthermore, DARPin can be very efficiently expressed in E. coli (accounting for >50% of all E. coli proteins) and very easily purified due to its high thermostability. These broadly neutralizing anti-toxin DARPins can potentially be formulated for oral administration to directly neutralize C. difficile toxin(s) in the gut. The approach of neutralizing bacterial virulence factors with DARPins should also offer a new treatment paradigm for other bacterial infection.

A Novel Technology for Engineering Binders to Membrane Proteins

Antibodies have been coined the ‘magic bullets’ against many human diseases. However, there remains significant challenges in the engineering of antibodies targeting multi-pass membrane proteins, which encompass a large number of therapeutic targets such as cell surface receptors and the ion channel proteins. The difficulty in engineering binders to membrane proteins stems from the limitation of the current in vitro selection/panning technologies, such as phage display, which require highly purified target protein. Unfortunately, membrane proteins are often refractory to purification due to their dependence on the cell membrane for proper folding and activity. Currently, there is no effective in vitro technology for the discovery/engineering of binders to multi-pass membrane proteins. The overall goal of this study is to develop a novel technology – SMURF (Simple proxiMity coUpled mRNA display) – for engineering protein binders to protein targets on the cell surface, thus bypassing the need to purify the target protein. SMURF combines mRNA display with the proximity-assisted-DNA-assembly phenomenon and, unlike conventional panning in which all binders to a solid support are enriched, SMURF fosters the enrichment of binders only to a desired target protein on the cell surface.

The overall goal of the project is to create a protein-based viral prophylaxis (PVP) that will provide short-term (~2-3 months) protection against various viral infection following each intravenous infusion. This PVP approach is inspired by the ecological source-sink theory which states that the population of an organism in a landscape is controlled by the frequency of habitats that either support (source) or do not support (sink) its population growth. A population will decline towards extinction when the fraction of sink habitats in a landscape exceeds a threshold frequency. According to this source-sink theory, the spread of viral infection in the body, from a limited local infection (e.g. cells directly contacting the saliva of an infected mosquito), is largely contributed by the below the threshold amount of sink cells (sink habitats) in the body (landscape). The central hypothesis of the project is that the introduction of viral ‘sink’ cells in the body can act as prophylaxis against the viral infection. In this project, I proposed to convert host cells into artificial viral sinks by functionalizing them with PVP. The duration of protection (2-3 months), although much shorter than that of a vaccine, will confer adequate protection in many scenarios, such as women in the 1st trimester of pregnancy, travelers to pandemic areas, and personnel taking care of infected patients. Longer protection from PVP can be achieved through repeated infusion or gene therapy.

Congratulations to Karu for his paper “Chicken-derived CD20 antibodies with potent B cell depletion activity” being accepted by British Journal of Haematology!!!

Congratulations to Vikas and Rudo for their paper “Potent and broad neutralization of SARS-CoV-2 variants of concern by DARPins” being accepted by Nature Chemical Biology!!!

Michael Woolley has joined the lab as a new MD/PhD student! Welcome!   🙂

Farewell to postdoc Domyoung Kim! Congratulations on your new position at iBio!

Ben Thomas from the Genetics program joined the lab as a new PhD student. Welcome! 🙂

Congratulations to Zhilei’s postdoc advisor, Charles Rice, for winning the Nobel Prize in Medicine. It has been a great honor to work with Charlie on HCV!!!

Vikas joined the lab as a new postdoc! Welcome!

Lab moving to brand new space in the MREB2 building!!! Thanks to everyone who helped with packing and unpacking the 300+ crates/boxes.

Mehdi Bidokhti joined the group as a postdoc scientist! Welcome!

Nag and Ana’s manuscript “Retargeting lentiviruses via SpyCatcher-SpyTag chemistry for gene delivery into specific cell types” has been accepted for publication in mBio. Job well done!